Screen Time is a feature that Apple added to iOS 12, which allows you to keep track of how much time you spend on each app you use, how many times you wake up your iOS device, and how many notifications you receive. This data can help you cut down on your device usage, and you can use Screen Time to set limits for your kids.

Screen Time was also added to macOS Catalina, with the same features. However, it doesn’t seem to work correctly. Rather than showing which apps are frontmost when you work, it shows how long apps are open: 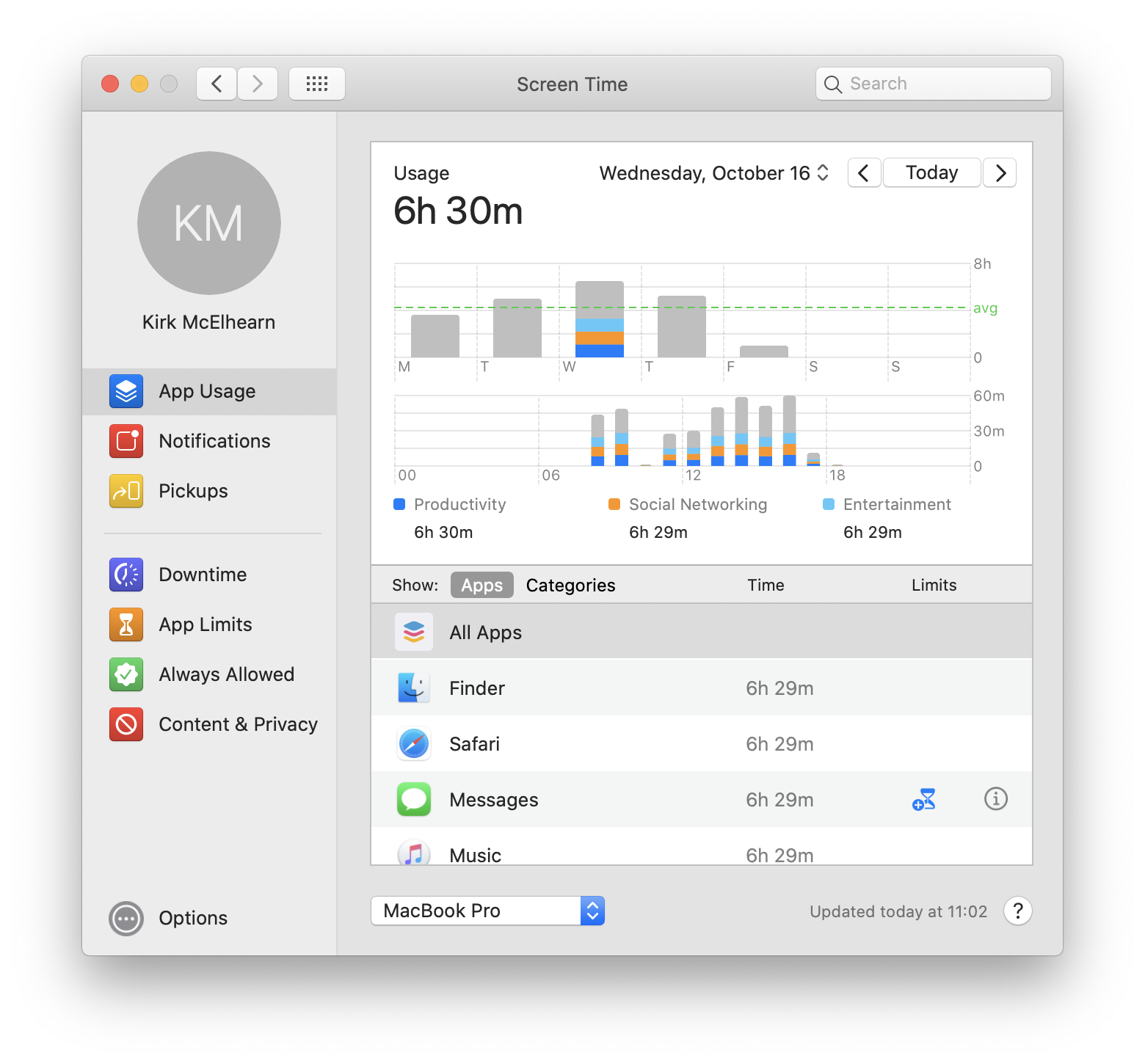 I keep a number of apps open all the time: Mail, Messages, Fantastical, Omni Focus, Music, and a few others. So counting them as actual “screen time” makes no sense.

In the above example, all these apps were open all day – obviously, the Finder is always “open” – so the data is essentially useless. Is this a bug or a feature? I would think that Screen Time should only record that time when apps are frontmost.

Screen Time also records “Pickups.” While this makes sense for an iOS device – how many times you picked up your iPhone and woke it up – it really makes little sense on the Mac. A pickup on the Mac is the number of times you woke the device from sleep, or restarted it. 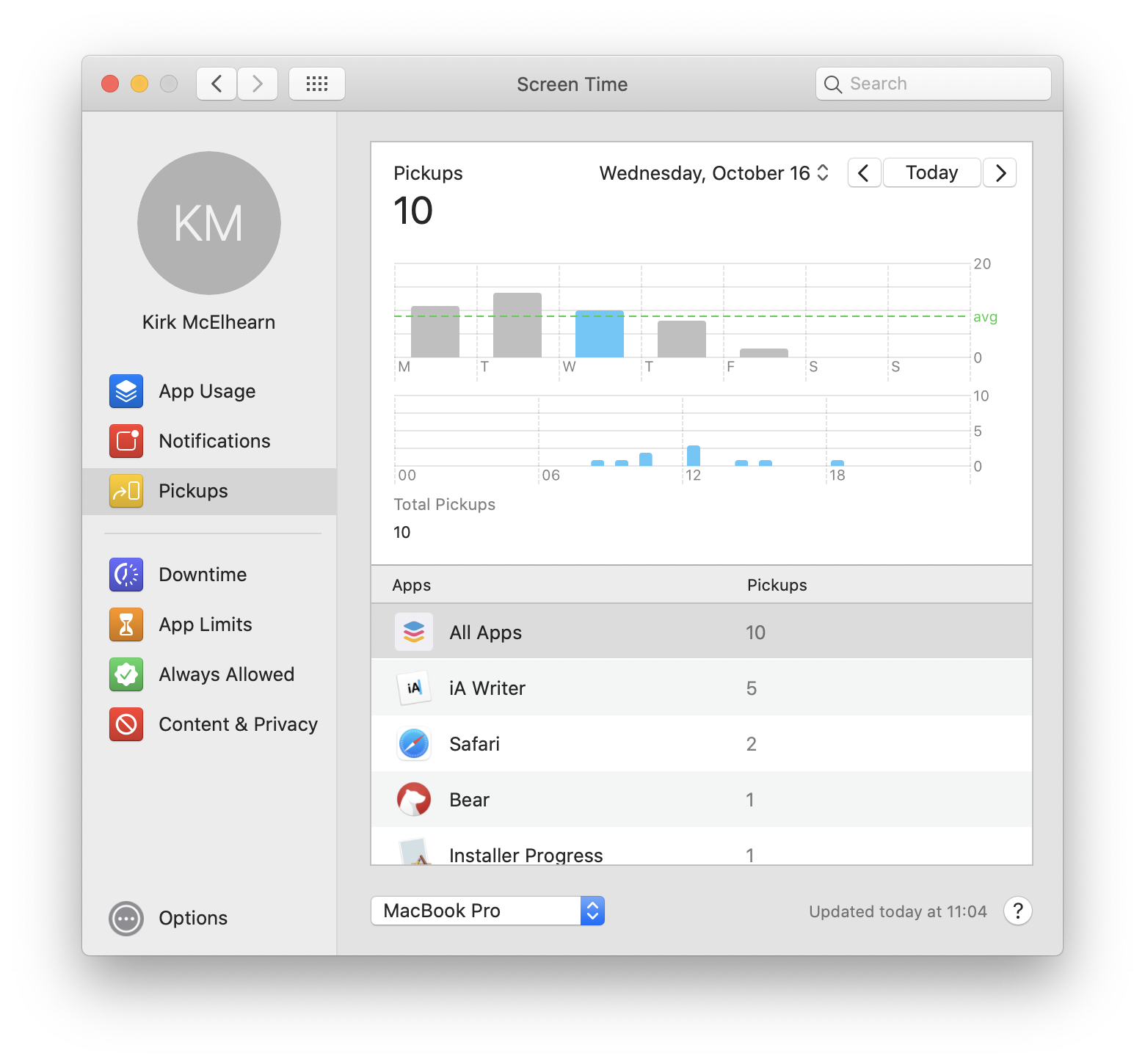 And the apps listed in the lower pane are supposed to be the first app that you used when you awakened the Mac, but seem to be just the frontmost apps when the Mac is awakened. So if I put my Mac to sleep with Safari frontmost, when I wake it up, it will be counted as a pickup. On iOS this makes sense, because when you wake up your iOS device, you are on the home screen, so you have to actively choose which app you are going to use. Also, it doesn’t seem to be reliably updating on the Mac; right now, I’ve put my Mac to sleep a couple of times yet when I awaken it, it doesn’t add to the number of pickups. And it’s not counting the System Preferences app, which I’ve used several times after waking up my Mac to view Screen Time.

Finally, it records notifications, as does iOS. While iOS notifications can be a disturbance, since they appear on the device when it’s not in use, this isn’t the case on the Mac. If the Mac is asleep, notifications won’t display; they will, however, if your screen is dimmed, or if a screen saver is active. In any case, is there any value to counting these notifications, especially here where I have Music set to notify me of track changes? 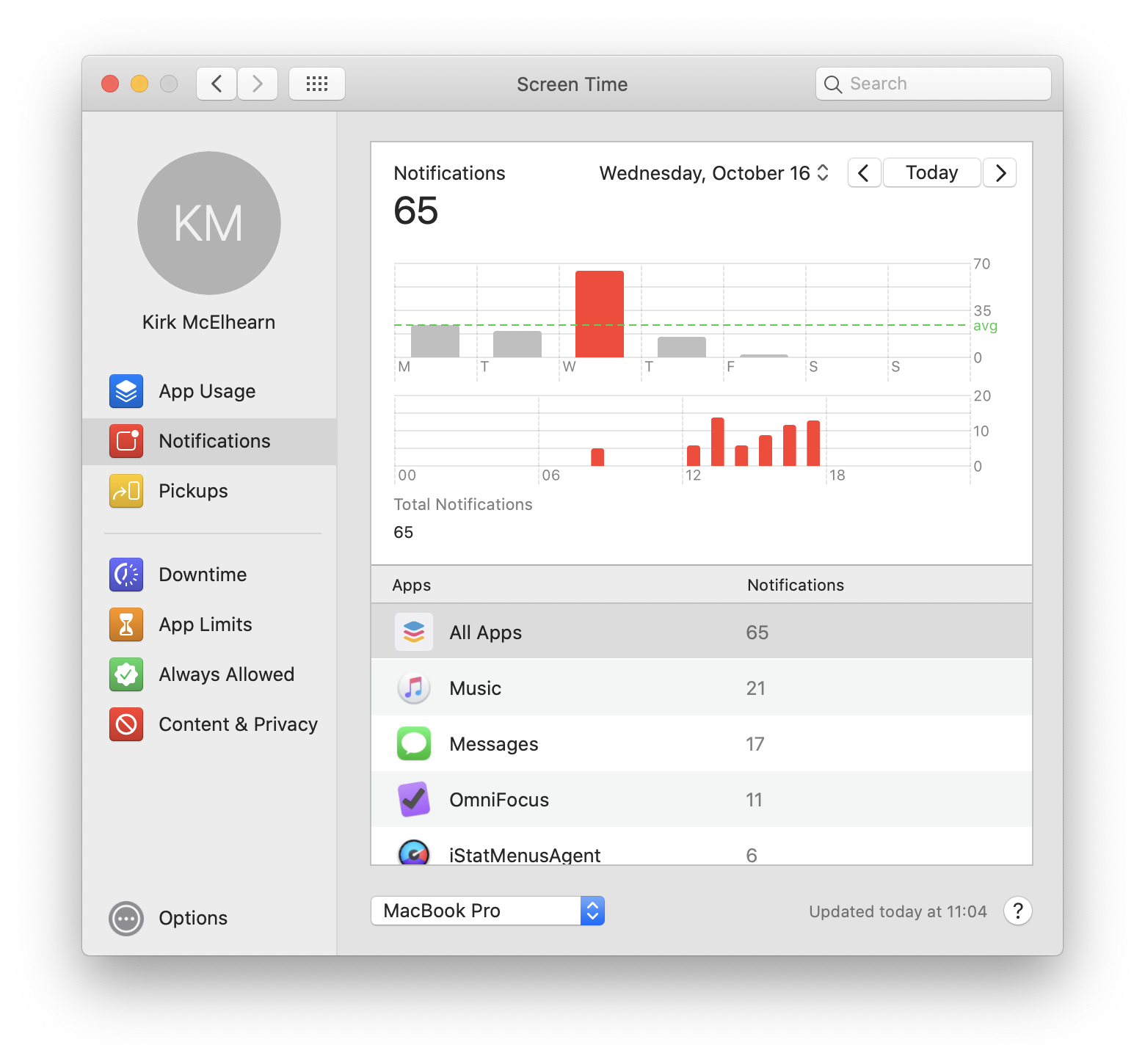 While Screen Time is a useful feature, notably for setting limits for kids, its information isn’t very reliable. Say you have a child who has a game open in a window, or hidden, but isn’t playing; in the meantime, they’re working on their homework. All the time the app is running counts as usage time. There’s really no way to get any reliable information about which apps are really used.

And, for example, I might want to track my time using certain apps to bill clients, but with Screen Time, I’d have to remember to quit the apps when I switch to another app, and that is somewhat futile, because I certainly won’t remember.

It’s worth pointing out that Many Tricks’ Time Sink does this quite efficiently: by app, but also by window, so you can easily record exactly what you’re doing, especially if you are billing clients by the time you spent working for them.