As You Like It is my favorite Shakespeare comedy. I don’t know why: perhaps it’s the fairly straightforward plot, or the fact that it’s all about people trying to be happy, or the wonderful language which doesn’t get too obscure, and just exudes enjoyment. It was also the first play I saw at the RSC after I moved to the UK in 2013. (Read my review of that production here, and my interview with Pippa Nixon and Alex Waldmann – Rosalind and Orlando in that production – here.)

As You Like It is certainly a crowd-pleaser, and it’s one of the plays that gets produced fairly often. I think the fact that the RSC is doing it so soon after its last production is mostly to do with the fact that the RSC is currently in a process of putting on all of the plays in a six-year period (though I think that may have slipped to eight years), and because they started filming their plays and broadcasting them to cinemas only at the end of 2013 with Richard II. So this production will eventually be part of the box set of all the plays on DVD and Blu-Ray.

This year’s production has a lot going for it, but will not please everyone. It’s quite minimalist; there are essentially no sets (though there is a thing that happens at the end). It opens with Orlando (David Ajao) sitting an a swing suspended from the rafters, above a circle of faux grass. The first half hour – the bit where he wrestles, meets Rosalind, and they both get banished – takes place with that grass on stage. When the action moves to Arden Forest, the grass is removed, the house lights come on, and there are announcements over some speakers at the back of the stage. I believe they say “All the actors to the stage,” which is followed by a few more announcements, then “All the world’s a stage,” referring to the famous speech by Jacques that comes in later. The back of the stage lifts up, and you can see the backstage area; the undecorated bit, the brick walls, the ropes tied to the walls; what the actors see when they’re behind the decor.

At the same time, most of the actors come out on stage and some clothes rails are rolled out with costumes. Some of the actors change their costumes, they all mill about, then the costumes are wheeled off and they pick up the play. 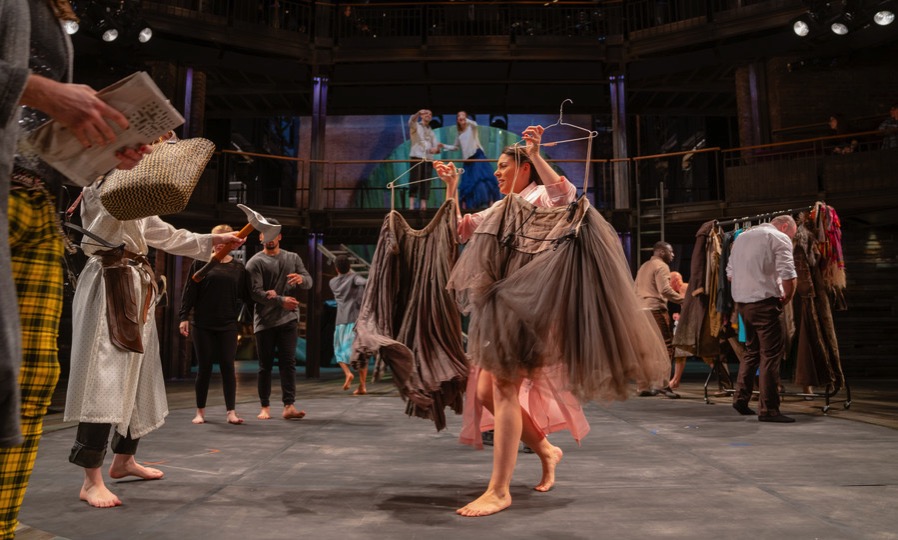 The first time I saw the play, I really didn’t get this, but the second time I think I understood what the director, Kimberly Sykes, intended. This is a literal interpretation of “All the world’s a stage,” with the actors showing that they are, indeed, actors, a sort of meta fourth-wall approach to the play. From this moment on, the lighting changes a bit until the end of the play, but the audience is part of the raw theatrical experience, and is almost always illuminated.

Since there are no sets, there are no trees anywhere to be seen. This is a forest, and trees are important in the play. It is either the vertical beams in the theater that are supposed to be the trees, or the audience itself, made up of hundreds of trees. (My suspicion is that it’s the latter, as Orlando pastes a few post-its with notes about Rosalind on different audience members.) All this means that the director’s vision isn’t entirely clear, and this may contribute to the many reviews that were ambivalent about the production.

In any case, looking at it through this point of view, it’s a charming, fast-paced studio play. The lack of sets makes it seem more improvised, and the fantastic Lucy Phelps is radiant as Rosalind, carrying the play throughout (Rosalind has about 20% of the lines in the play). 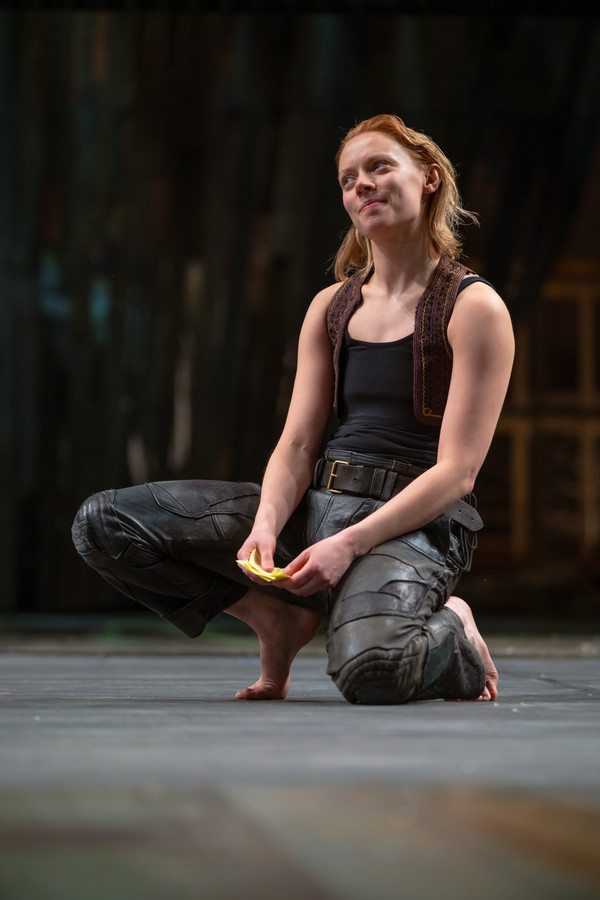 (It’s interesting to note that these production photos were shot during the dress rehearsal, but the director changed Rosalind’s costume to simple black trousers with suspenders over a white shirt. This change makes her look a lot more “pixieish,” and I think it works better. Her hair is also slicked back more, giving her a somewhat androgynous David Bowie look.)

There’s lots of audience interaction – see this article, about when I got on stage during one performance – and there’s lots of laughter and fun throughout. Sandy Grierson as Touchstone was marvelous, clowning around to keep the action moving, and Rosalind hops into the audience a few times. Anthony Byrne plays both dukes – Duke Frederick in court, and Duke Senior in the forest – and is wonderful in both roles, the former being powerful and angry, the latter being open and friendly. 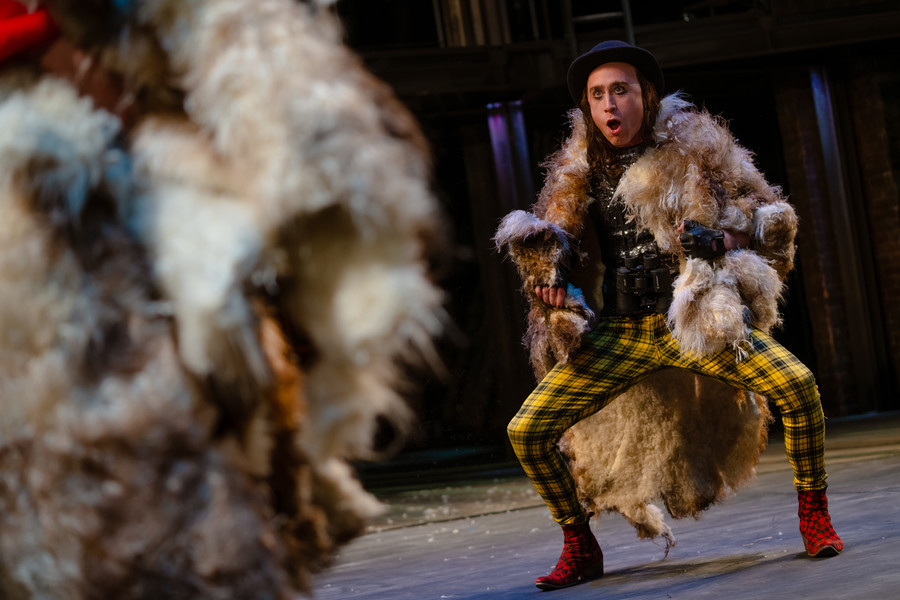 Another quirk in this production is the 50-50 gender splint, which means that Jacques is a woman (Sophie Stanton), and Silvius is Sylvia (Amelia Donkor). This latter change alters some of the text, as Phoebe is in love with a shepherdess instead of a shepherd. I don’t think the Jacques was melancholy enough, but it was interesting to hear Stanton recite the famous “seven ages” speech.

Hats off to the many minor characters who gave their all, notably Charlotte Arrowsmith, a deaf actor, as Audrey, whose signs were interpreted by Tom Dawze as William.

Oh, and there’s that bit at the end with the massive puppet as Hymen, the god of love, giving benediction to the marriages. It’s the only large item on stage for the entire performance, and it is quite jarring. It’s imposing, and it’s really not necessary. I really don’t see why the director chose to close the play with something like this.

Having seen this production twice, I look forward to seeing it again before the run ends in August. If you can make sense of the staging, it’s lots of fun. The time went be very quickly, with never a dull moment. There were songs, lots of laughter, some tears; all in all, exactly what the world is like.